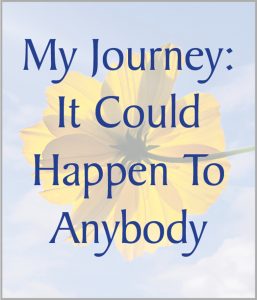 As a woman living with HIV, I have been through a lot in my life. As someone who was born with the virus, I grew up taking medicine, going to numerous doctor appointments, and getting stuck with needle after needle. This was normal to me, as I never had a life before my HIV diagnosis. Being born with HIV puts you in a different category from those that acquire it later in life.

I was born in the ’80s, at the beginning of the AIDS epidemic, and the virus was still so new that people didn’t really know what it was or how it was transmitted. At that time, they had no medicine to treat it, and I was not expected to live past the age of four years old. My birth mother had her own problems and so almost immediately after I was born, I was taken from her and placed in foster care. Thankfully, I was placed with a foster family that would become my forever home. Growing up, I never knew why I had to go to so many doctor appointments or why I had to take pills every day. Most of the time, I would find ways to not take my medication because it made me feel sick and I felt better without it.

My parents would set out my pills for me each day and I would flush them, throw them away, and do everything with them but take them. I ended up in the hospital for a month with stomach colitis because of the inconsistency with which I took my medication. Seeing me struggling to take the medication and my poor numbers as a result, my parents finally sat me down at the age of 12 and had the family therapist tell me my HIV-positive status. At that time, I did not really have any idea of what HIV was, so I immediately told my two best school friends. I was lucky that they never told anyone, or if they did, I never heard about it or was ever treated any differently. As I grew up and went on to high school, I started becoming aware of how negatively those living with HIV were perceived. I made the decision not to tell another living soul, and I did not. I still was not taking my medication consistently, so I had no trouble hiding that part of it. If I spent the night at a friend’s house, I would not even worry about not taking my medication. My friends would sometimes ask me why I would not donate blood when they were doing it, and I would just tell them it was because I was afraid of needles. I kept quiet about my status for the rest of middle school and all through high school.

To this day, those classmates and friends that I grew up with, still don’t know that I’m a woman living with HIV. This unique perspective is one of the many factors that have shaped me into the person and woman that I am today. I have always been motivated but became even more so after the birth of my son, who is negative. Being a single mother, while also living with HIV, has brought out a strength in me that I did not know existed. I grew up in a stable, loving environment and this is the kind of life I am motivated to give my son.

I recently graduated with my master’s degree in Business, with a focus on Healthcare Management. It was an online-only, 2-year graduate program, and in those two years, there were many times when I wanted to give up and throw in the towel. I stayed up late to work on assignments. I was exhausted, nervous and stressed, etc. But I put my nose to the grindstone and kept pushing forward because I knew, in the end, it would be worth it. I would be one step closer to achieving the goals and dreams I had planned out for my son and myself. During the two years I was in school, I still had to keep up with taking my daily medications, going to my doctor’s appointments, getting labs drawn, and working a full-time job. There were some nights I would be so busy with my son and doing schoolwork, that I would forget to take my medicine. On other nights, I simply wanted a break from swallowing pills, so I would make the conscious decision not to take them at all. During all this time, my viral load never increased beyond undetectable, but my CD4 count did drop some, which I attribute to the constant stress and exhaustion of it all.

Being a mother, single or otherwise, is definitely stressful in its own right. But, when you add school, living with HIV, making sure to eat healthily and exercise regularly, working, and so on, to it, everything becomes one big melting pot that often threatens to boil over. I have always found ways to push through the hard times because I have had no other choice. I have a little person depending solely on me to make the right decisions. I am thankful and appreciative to have the support and generosity of great friends and family, which is not something that a lot of people have. Their love, empowerment, and inspiration, it helps motivate me more to live a life that is successful, rewarding, and courageous.

This pandemic brings me back 37 plus years to the dark days of HIV. As a woman living with HIV little was known back then, as little is known about the coronavirus, except we all know how we can stay safe from contracting this deadly virus! The scientists are making great strides on a vaccine.

We must all do our part by keeping safe and educating as many people as possible.
So, sisters, let’s do this ! We are all in this together and much better equipped with knowledge.
“Again, stay in and educate” 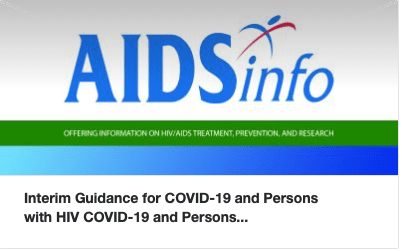 This interim guidance reviews special considerations for persons with HIV and their health care providers in the United States regarding COVID-19. Information and data on COVID-19 are rapidly evolving. This guidance includes general information to consider. Clinicians should refer to updated sources for more specific recommendations regarding COVID-19.